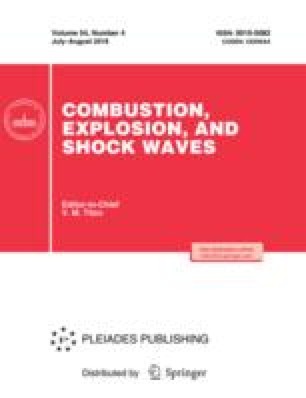 The heating of energetic materials by the radiation of fiber-coupled continuously-pumped lasers at near IR-wavelengths of 0.98, 1.56, and 1.94 μm was studied. Samples of pressed secondary explosives and loose gunpowder were used. The length of the linear portion of the temperature rise and the rate of its rise immediately after exposure to laser radiation were measured. It was established that the rate of temperature rise at the initial time was proportional to the laser radiation power aP. For a 600 μm diameter of the laser beam emerging from the fiber, the coefficient of proportionality a for secondary explosives was 6–250 K/(s · W) at a wavelength of 0.98 μm and 40–2000 K/(s · W) at wavelengths of 1.56 and 1.94 μm. For gunpowder, a = 7000–15 000 K/(s · W), which is an order of magnitude or more higher than that for most of the secondary explosives we studied. The possibility of increasing the efficiency of laser heating of secondary explosives by applying an absorbing thin film on the surface of the samples was studied. The heating dynamics and the initial stage of ignition of energetic materials by laser radiation were investigated.